The Importance of a Dollar SWAP Line

An engineer is trained through university and in the workforce to apply failure modes and safety factors into their designs. It doesn’t matter if it’s a structure, a circuit, a chemical or even mechanical equipment.

Running a business is no different.

Restaurants that only offered dine-in service quickly learned that revenue stream was dust during this shutdown post virus quarantine.

Only those that were ready with online takeout and delivery options continued earning revenue.

The stoic philosopher Seneca wrote, “What catches us by surprise hurts us double.”

And if your favourite mining stock has significant production in what I call negative swap nations, it could be at serious risk.

Not one knew what a SWAP Line was nor the difference between a +SWAP Line Nation vs. a –SWAP Line nation. As I walked them through my concept, all agreed the risk factors will soon become impossible to ignore.

Are there built-in risk premiums to the prices of certain stocks?

Yes. But not at the cost of creeping government ownership and eventual nationalization.

The Latin phrase Premeditatio Malorum tells you to prepare for all evils.

And today I’m going to get you up to speed on the overlooked risks to some of your biggest gold holdings.

I’m not making any friends with this theory. But I have to prepare my portfolio for the risks.

It’s about properly understanding and pricing in risk.

Something that has become overlooked in the resource sector.

I detail these risks in my latest briefing on The War on Gold.

The Importance of Dollar SWAP Lines

A SWAP line provides temporary U.S. Dollar relief to the Central Banks of certain nations (pre-approved by the U.S.) who need these financial lifelines to ease the stress caused by a lack of U.S. dollars in their own nation.

SWAP lines are increasing weekly and more nations will be added.

And they’ll be added only if the Nation needing the SWAP Line agrees to the terms of the U.S. government—both financially and geopolitically.

Is it just coincidence these are good standing allies of the U.S.?

Which Countries Do Not Have SWAP Lines?

Every other country in the world that’s not listed above.

So, why am I focusing on SWAP lines?

Because I believe nations who do have existing SWAP lines won’t screw with foreign operating entities (American companies) to the extent of the –SWAP Line Nations.

I still expect higher taxes in all countries as it’s the only thing politicians across the world have executed effectively throughout time.

Nations with existing U.S. SWAP lines won’t put Forex (FX) restrictions on the foreign (American) companies operating there. –SWAP Line nations may do so, and many have already.

This will cause less and in some cases prevent those U.S. dollars in –SWAP lines from being sent back home as dividends to the owners of the company.

Basically, the SWAP lines are monetary lifelines to ease the need for U.S. dollars in their own economies.

So, they won’t mess with Uncle Sam by screwing around and nationalizing foreign (American) companies’ assets on their soil.

The SWAP lines have worked in alleviating the “near term” desperation for U.S. dollars.

But nothing has changed fundamentally as eventually, the SWAP lines will have to be paid back.

Barrick Gold is one of the world’s largest gold companies and produces just over 5 million ounces of gold per year.

A few hours after my emergency alert went live, one of their projects was put on notice.

I want us all to be prepared for anything that can happen over the next few months. That’s Alligator Investing 101.

Now, things I expect to happen over the next 12 months in –SWAP Line Nations that DO NOT have SWAP lines with the U.S. is for those governments to:

These would be big negatives. It has already started in some –SWAP Line Nations and I expect a lot more to follow. This is something we have front and center on our watchlists.

I think many investors in –SWAP Line Nations will find this to be the case, even with precious metal and base metal producers.

That means the whole “benefit” of a weakening foreign currency that attracts investors to mines in emerging market nations may be negated by the government’s need to increase their take of a foreign owned and operated asset on their soil.

The Most Important Gold M&A Chart in the World

Earlier in this article, I mentioned countries in terms of

Let me explain why this is important.

The U.S. Government will only give SWAP lines to countries that are allies. That’s countries the U.S. government trusts and works closely with.

And most importantly, countries that accept and obey the terms and conditions set by the U.S.

When Russia and China get U.S. SWAP lines, then I’ll change my tune.

Until then, I’m pretty sure I’m spot on with this framework and its implications.

Let me give you a real-world gold producer example…

I’ve shared this with some of the bigger fund managers in the business and they had no idea. This is not a well-known concept.

It doesn’t matter whether we use places like Argentina or Turkey as our example – this will become the norm over the next few years in all –SWAP nations.

A –SWAP country like Turkey doesn’t allow you (as a company) to sell the gold you’ve produced easily into the international markets (for example a foreign owned smelter).

This would allow the USDs to go back home to their owners without any meddling of the Turkish government.

The government of Turkey will clip both sides of that sale (steps 1 and 3).

You can see it’s not a good deal for the foreign producer, but what else can they do?

Turkey is a pro mining nation. But that doesn’t mean that they will not increase taxes etc on foreign owned mining and energy assets.

Expect Turkey to do so until the point they are forced to choose between accepting the U.S. terms and conditions to be a +SWAP Line Nation, or if they refuse and go with the EMSP (Emerging Market Super Powers) led by China and Russia.

In places like Argentina, the company has strict foreign controls on the money. It’s very difficult to move those USDs outside of Argentina without getting clipped by the unreasonable government exchange rates.

When I walked them through my framework, each were shocked and had a new perspective on M&A over the next 12 months.

Now this next chart below is a FIRST of its kind EVER produced.

Green is good. Red is bad, as it implies higher risk.

The higher the % of exposure of their gold production to +SWAP nations, the better… 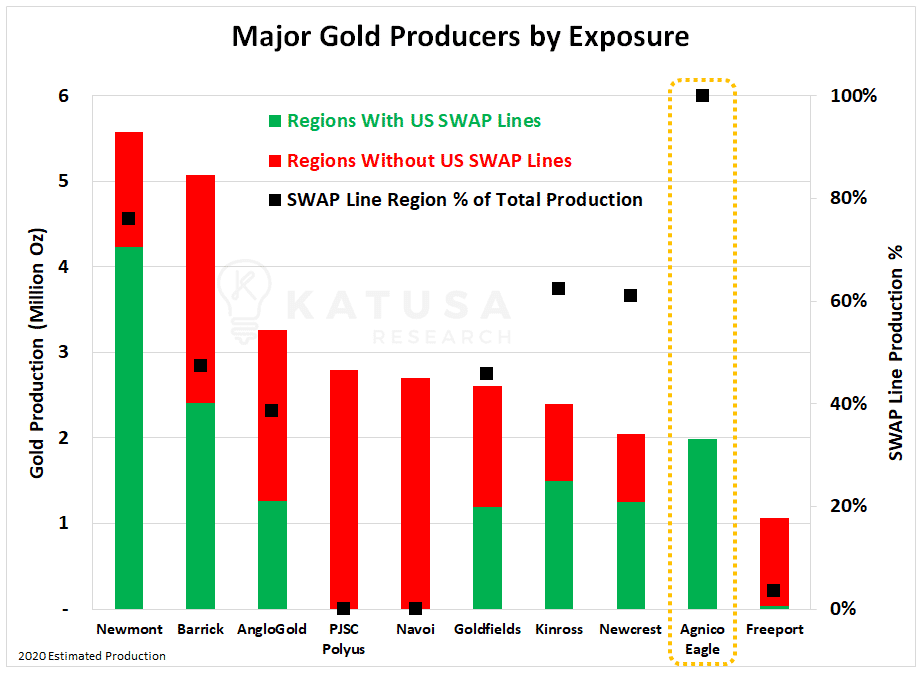 Right now, many analysts across the board in almost every research outfit give the same financial discounts to gold producers regardless of location.

When the NPV5 (Net Present Value at a 5% discount) financial models are created by these analysts, whether the project is in a +SWAP or –SWAP nation is irrelevant to most analysts.

This is just wrong.

Not all jurisdictions are the same. Nor should the discount rates be the same.

I think we’re going to see a major change much faster than anyone expects with regards to gold majors building assets in –SWAP nations.

I’ve been to over 100 countries so far in my career.

Between 2004-2010 I literally wore bulletproof vests to visit some projects.

I drove across Iraq with former French Foreign Legion soldiers who were our escorts and bodyguards for me to appraise the potential of an oil well.

Back in 2007, I spent a week in the ICU due to bat dung exposure because I went into an underground mine.

In the rush to be the first to see the potential of a massive silver deposit in Mexico, I went underground unprepared (in this case I was right and was the first to publish and finance the +300M ounce silver deposit—and our subscribers made a killing—but that was really stupid on my part).

I’ve done some exciting, stupid and dangerous things and travelled to some crazy places to find the next “Big Score”.

But after truly becoming one of the few in the industry who can say “been there, done that”, I learned a major lesson I want to share…

Yes, it’s true some big scores are waiting for those who are first to an exotic or war-torn place with a massive tier 1 mining deposit.

It makes for a sexy story that sells newsletters, and people love to read about it (Indiana Jones Speculation, I like to call it).

But those success stories are so rare.

The reality is, just as big of a score (and in many cases even bigger scores) can be made when you are patient in major sell offs in politically stable jurisdictions like the U.S.

But we should only care about making the most amount of money with the least possible amount of risk.

Maximum upside with minimal downside risk – that’s my strategy in this market. I’ve talked about it for years now.

And for that reason, I want to prepare everyone for this potential scenario in the gold market.

Read the playbook and be prepared.

Be prepared both mentally and financially for what to do if gold prices take a big hit to the downside.

Luck is being prepared when the opportunity arises.

Cartel Conspiracy and the Silver Massacre

Superior in luster, value and perception, gold is the king of metals. Silver has always played second fiddle to its big brother. The “gentleman’s metal” has a natural tendency to go under the radar compared to gold. And it’s also likely why it’s been the target of many more conspiracies, […]
Do you like it?
0 Read more

Is NETFLIX Being Beaten At Their Own Game?

The pandemic has caused major companies to go under… But industries that rely on home-based customers are growing.
Do you like it?
Read more

The stock market has been extremely volatile this week, folks… We’re finally witnessing the pretty good pullback that I‘ve been predicting for months. When the market experiences a sell-off, we tend to see opportunities in various types of stocks.  And boy does this one spell opportunity…  Right now I’ve got […]
Do you like it?
0 Read more
Load more